There is currently massive media coverage of the health status of the two American presidential candidates. Hillary Clinton contracting pneumonia and appearing weak at the 911 memorial ceremony, and Donald Trump revealing doctor’s documents showing that he is bordering on obese and takes cholesterol-lowering drugs, have almost completely overshadowed more substantial political issues in the campaign this week. The implicit (and sometimes explicit) assumption for why this knowledge could be in the public interest is that the presidency is a tough job that requires strong, healthy candidates. So one might wonder, is this focus on the health of the candidates reasonable? How can we expect the job to actually affect the health status of whoever wins in November?

This type of discussion also tends to surface when presidents are nearing the end of their terms. As a related example, president Obama made a statement a while ago bemoaning getting ‘older and creakier’ during the course of his presidency. This, of course, is a natural part of aging, regardless of whether you’re the president or not. But there actually has been a couple of papers published looking into what the health effects of holding political office might be. Some have argued that the stress of the job is likely to make our politicians age prematurely, while there are other arguments regarding the health benefits of having autonomy and influence (perhaps not only over your own life circumstances, but over others as well) that could apply to people in power. Results have not been entirely clear, but late last year a pretty solid paper was published where the authors addressed this question.

The authors, Olenski et al, gathered data over the longevity of heads-of-state and the runners up in the same elections, for a total of 17 countries, from 1722 til the present day. While this causal inference strategy is admittedly weak (it would have been even better to only include candidates in close elections, but the sample would likely be too small), I think it provides the best test of such hypotheses to date. The results? Election winners tend to live more than four years shorter than election losers. That has to be considered a massive effect, if interpreted in causal terms. But is that the end of the story?

If we’re allowed to speculate, I think it’s reasonable to add a third possible mechanism on top of stress and autonomy, namely access to resources. Presidents have historically gotten access to not only wealth, but an unprecedented level of healthcare that few, in previous centuries, could match. That leaves us with stress effects, autonomy effects and resource effects. At least two of these would appear to be highly contingent on the time period – namely stress and resources.

To begin with, the United States has, over the last two centuries, become a dominant world power, with all the responsibilites that brings to the chief executive. The history of the US has always been turbulent, but I think it’s fair to say that the consequences of a significant misstep from the POTUS, globally speaking, was significantly graver during the Cold War than during the 18th century. Meanwhile, the media has also begun to take its investigative role much more seriously since the mid 1800’s, to much grief from politicians – remember Roosevelt scornfully labeling journalists as “muckrakers” in 1906. Suffice to say, it seems likely that the stress of the job shortly after the republic was founded was nowhere near contemporary levels.

On the other hand, the resource effect seems likely to have decreased over time. Health care is now something that most people have access to, and health gains as a function of wealth has greatly diminishing returns. What this seems to lead us to is the simple hypothesis that the election winner in 1788 (Washington) may in effect have had health gains over his rival, while the election winner in 1972 (Nixon) may have experienced the opposite. Put simply, the character of the job has undergone quite dramatic changes over the centuries – and this may well be reflected in health effects on politicians as well.

I happen to sit on a dataset of the life spans of almost all American presidential candidates, from the founding of the republic and forward, that I figured I can use for some ad-hoc hypothesizing. This dataset includes not only the runners-up, but every presidential candidate (believe it or not, the US has historically quite frequently had more than two major political parties running). Of course, this is a much weaker design than that that used by Olenski et al, since the groups will be even more different from each other. But good enough for some speculation!

While Cox proportional hazards models, or other types of survival analyses, are usually preferred when dealing with longevity data, I will settle with presenting some simple OLS-results just for clarity. Birth year is adjusted to begin at zero, and the age of the candidate at their last election is controlled for to avoid immortal time bias. I also excluded presidents who were assassinated, since this is an occupational hazard not connected to either stress, influence or wealth. 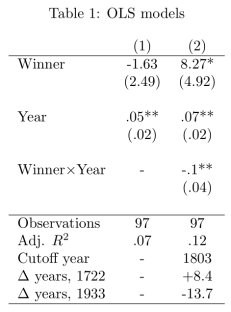 So, there is a weakly significant positive main effect of winning, as well as a significant negative interaction with time. That appears to be consistent with the hypothesized change in the character of the job. To see this interaction graphically, I present a marginal effects plot, and a scatter plot with all data points as well as separate trendlines for winners (that is, presidents) and other candidates.

Candidates running around the birth of the republic were better off winning, in terms of life expectancy – in fact, the trendlines are more than eight years apart, indicating a substantial advantage for the upcoming incumbent. On the other hand, later in history that relationship is completely reversed, and there is a 13 year disadvantage of becoming president. The cutoff birthyear is approximately in 1800, which means that the changing sign of the effect corresponds roughly to being president before or after the Civil War.

These effect sizes are probably far too large to be taken at face value. As I’ve pointed out, this data does not provide a reliable causal identification strategy. But it tells a funny story:  Hillary and Donald, old and frail as they may be, would perhaps have been better off running two hundred years ago. On the other hand, being in the unenviable position of running against the likes of George Washington and Thomas Jefferson could very well lead to a level of stress that no modern candidate is up against.

View all posts by RAhlskog 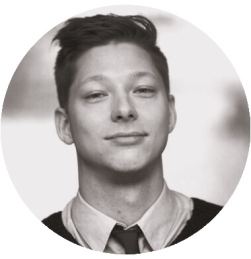